VYDE : A Whole New Game
27 May 2013
In most immersive sims, plenty of importance is given to playstyle and choice, they make it a point to provide players with an arsenal of options at ever step which empowers them in ways other games don't. Most examples I can think of can be classified as stealth games, or at least games that allow you to sneak around in the world. While other (inferior in my opinion) stealth games don't stress on playstyle all that much and only work with this thing designers like to call 'second stage mechanics'. The one and a half minute after Snake is spotted and enemies are searching for him is when the dynamics of the world have been changed momentarily, everything from enemy behavior to the player's goals change instantly for a short duration, which can introduce the much needed variety in gameplay. 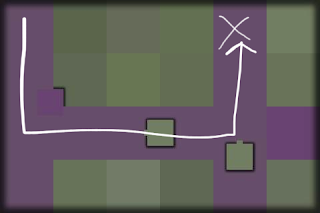 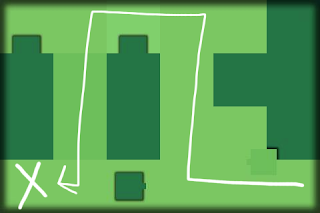 I call VYDE a stealth game yet it has none of these characteristics, nothing in the game is actually simulated, enemies follow strict paths and there are no second stage mechanics to speak of since detection leads to instant failure.What then is that one thing in VYDE that makes it good, if at all? Is it the color-hiding gimmick or the abstract squarish minimal look, both of which actually make the game harder to understand. Players tackle every level in a two pass process - identification of the correct route to the exit which is apparent from the colors, and then the actual performance of that plan. The identification happens almost instantly at first glance, the difference between the cells that are safe and those that aren't is made clear from their colors and enemy patterns are quite obvious. Since it's not encouraged to start moving before you have a set plan in your head, the level isn't learnt by actually exploring it through the act of playing, but rather a passive calculation which doesn't involve interacting with the world in any way. What this creates is the kind of experience that I found extremely boring. Once I've calculated the route I'm going to take, the rest of level is just a test of my dexterity, or how well I can function the awkward controls that aren't best suited for touch screens anyway. 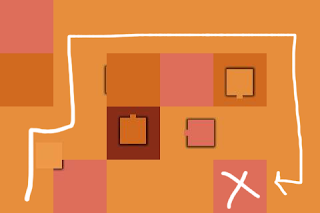 Apart from not having enough space to allow more fleshed out levels, there wasn't really any scope of introducing more variety in gameplay. I tried smoke bombs and traps but they were too cumbersome to use, making the already difficult to comprehend control scheme even more complicated. The question I asked myself then was - if I can't add anything to the game, what could I possibly change or remove that could make it better? A week ago I was toying around with some levels and I prepared this obnoxious mess of a room, with random shades of red thrown around and enemies with movement patters long enough to never remain synchronized with each other - and suddenly I had a whole new game with me.
I increased the percentage of safe cells on the map allowing the player to roam freely, effectively increasing the size of the map. This sudden boost in freedom was then complemented by more enemies with longer routes, which were less predictable to chart out. These changes eliminated the first problem we were having, players could no longer analyse and find an effective solution to the problem by just staring at the level because enemy positions as a function of time were no longer obvious. This solution only partly solved our problem, players need to be encouraged to explore the level and that would only happen if I wasn't pushing them back for the smallest of mistakes. Levels are too small and they finish quickly, the average play time never exceeds ten seconds which is not right. How do you make the levels bigger and also introduce enough room for players to recover from those errors without actually restarting? I'm ashamed it took me almost a year to solve this one.

We decrease the game speed! If both the enemies and Bob together move slower than maybe half an inch per second, the player can extrapolate enemy positions with enough time to evade an impending collision. If I can now guarantee an opportunity for the player to avoid being detected and recover from a mistake without being thrown back, I've successfully encouraged the player to find a solution to the given problem by actually PLAYING the level. The process of understanding enemy movement patterns to identify a safe route is now intertwined with the act of roaming the map, both of which can no longer exist effectively  on their own. The question of whether or not Bob is going to be safe on a particular cell will be answered when you actually show up there and not before that. From a two pass process we've turned it into a continuous feedback loop where the study of enemy movement patterns and your own position allow evasive maneuvers that constantly change the variables to the function that describes what comes next. I feel the maps are more exciting now, the difficulty level is more effective and feels fair. Earlier the trial and error felt more like hitting your head against a wall, you weren't exercising your brain to come up with a solution because you already knew it. Now the levels are long enough for every attempt to produce this kind of tension, accumulating a cost for every second invested in playing which pays off if you're able to actually complete it. It's amazing how ten seconds could add so much.
I removed most of the levels that I wasn't happy with and replaced them with new ones which learn from all that we've discussed above. Even though it falls short on many fronts when it comes to the kind of stealth game it was trying to be, I'll just say it's a different sort of fun and I'm happy with it.
Okay, who wants to play?
Back to Top